When considering how to market your website, it is worth making sure you are up to date on a vastly changed landscape. A lot has changed in the last few years and ambitious claims from pumped up seo salesman should be treated with caution.

The seo party
Lets begin by transporting back in time to 2009 and the boom time for seo. This was a period when ranking changes happened every few weeks and were subject to well understood algorithm updates. Exaggerating the simplicity somewhat, the website with the most links would win the rankings war. The more links you had, the higher your traffic would go.

Although other factors were a consideration this was an unprecedented era for web entrepreneurs. Any seo company could employ vast teams of staff, in low paid positions in developing countries to build websites and links to a variety of domains. What’s more the approach worked and ever ambitious marketing claims could be made and verified, the beast was feeding itself on an ever growing demand.

One positive from this frenzy was the growth of the small business retailer. Via these tactics, small operators were able to hit back at big business by enjoying high traffic levels and rankings above esteemed competitors. Unprecedented growth could be achieved and this lead to many web based start up success stories. However, as with any rapid high, few forecast one day the bubble would burst and the downside could turn equally dramatic.

What’s in it for Google!
Positioned as one of the world’s largest companies and running the most successful search engine in the world, Google was able to observe this phenomenon. The question they must have asked is ‘what is in this for us?’ as everyone seemed to be making money out of their website without contributing to the provider, i.e Google!

Google relies on its successful AdWords business model offering PPC (Pay Per Click) advertising with non-paid listings (organic) designed to provide free and relevant search data for site visitors. The growth of seo was not benefiting either cause and it was clear action was needed to take control of their own website destiny.

The revolution begins.
In 2010 the first signals of change sounded the early warning alarm as Google began updating listings several times a day and this became known as the ‘Caffeine Update’. No longer could a ranking page guarantee to remain unchanged for month after month. This represented a subtle, yet significant start to the revolution, with few anticipating what was to follow.

February 23rd 2011 saw the introduction of the ‘Panda Update’ named after one of its creators Navneet Panda.  Panda targeted poor quality websites with second rate content and customer value, amongst other criteria. A large step had now been taken and the war on spam and low quality websites had begun in earnest. The number of sites affected was large, with ranking plummeting for poor quality websites held up by dubious seo.

Panda and Penguin Join Forces
Although significant, Panda represented only part of Google’s plan to assert itself and the true extent of change could not be appreciated until combined with the ‘Penguin Update’. Penguin was unleashed on the 24th April, 2012 and aimed right at the heart of the seo bubble. This update punched right at the core of seo schemers battle plan and tore it into shreds.

Penguin punished sites for links designed at manipulation and turned the tactic of using anchor text such as ‘flowers’ with a clickable link to a flower website into a red flag zone. This had been the backbone of seo for many years and created a crash of large proportions with literally thousands of websites seeing their traffic levels fall by as much as 50% over night.

The Aftermath of Free Traffic Business
Since the introduction of both Penguin and Panda the updates have continued to roll out on a regular basis, turning the screw tighter and tighter on seo manipulation. Many small business owners have been left with ruined businesses and feel angry at Google for this. I have seen first hand the effects and can understand the hurt, but it is difficult to argue against the virtues of Google’s decision.

How can website owners feel they have a right to something they do not pay for? Unfortunately paying an seo company is not paying Google and to feel you have a divine right to free traffic is not logical. Everyone enjoyed the ride while it lasted, but the wise planned ahead.

Some relying on seo for a living will continue to argue they can still achieve results via the latest tactic. Our argument is the latest tactic will be the next agenda for Google’s war on seo.

A New Future
The good news is the future is bright. Logical marketing, along with a great website experience and structured investment are now rewarded without competing with scheming web seo and scurrilous risk taking. Maybe common sense does rule after all!

Marz Ventures is a digital marketing consultancy and Google Partner based in Shrewsbury offering a full array of services from PPC through to web design.

More from our blog 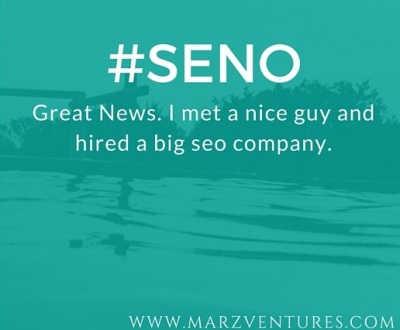